How do I start telling about the craze about a film star that went from level 0 to 1000000000* (and still growing) in just a day and with just one movie?

I had no clue that he existed and what I was missing all along not knowing about him. Like many non-Telugu speaking from other cities,  I had seen the trailer of this epic movie #Baahubali  by mere accident when some friend had shared it on a social networking site. This was couple of weeks before the movie released.  After watching the trailer,  I decided I have to watch this for the magnanimous story telling and direction. And still I wasn’t engulfed in the craziness of the star.  I was still me,  like millions wanting to watch the movie on the first day first show. 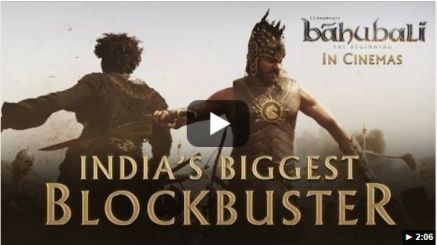 Finally when the D-day arrived, I could by mere luck get the booking done beating the odds. My friend accompanying me to the movie told that I could have waited for a day or two instead of watching it in the first row so close to the screen. I was like, that’s the fun part… I was trying to explain that the movie has gained much hype in the media so watching it on the first day first show in the front seat means that we would get to experience the madness and fanism typical South Indian style.

And then comes July 10th…I was unaware of what that day would bring or how it would change me from being a regular movie buff into a crazy #Prabhas fan. As we began to watch the movie, this epic called #Baahubali,  my expectations was only to get entertained. I wasn’t prepared to get carried away by the actor who swept me off my feet in just the first shot of the movie. The introduction shot where he’s atop a mountain climbing the waterfall trying to get higher and higher was magical. The mischievous smile, his posture and the can do attitude was enough for me to fall in love with him just then and there.  I was dumbstruck and with mouth wide open gazing at #Prabhas,  the hunk and #Baahubali in every way possible. After that intro shot,  I was transported to #Maahishmathi Kingdom and traversed along the story line and fell deep into the magic woven story that I forgot about my friend and the rest of the audience in the theater.

By the end of the movie,  I was like why did you turn off the movie,  I didn’t wanted go home but wanted to watch it again. I coined an idea to my friend if we could watch it again the next show.  My friend laughingly told that there’s no way we could get the tickets and had to come back later and so dragged me out.

Everything around me looked hazy as I was still wandering somewhere in the huge Kingdom of #Maahishmathi behind #Shivudu aka #Baahubali.

The madness started from then on and hasn’t receded but has only been growing up. An actor, a great story and depiction of emotions could be portrayed in this way was unimaginable for me. I was smitten by the handsome hunk #Prabhas and I was lost in the magical story.

That day I found in me the fan that never existed till then. I don’t think I can beat any fan who have devoted many years to him since his first movie. Yet, here I was in my own way slowly getting into a trance called #Prabhas. That day was the beginning of my mad craze for Darling #Prabhas.

8 thoughts on “The beginning of madness called #Prabhas”